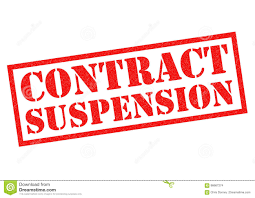 STEP TWO –  AGREEMENT ON THE TERMS & CONDITIONS OF THE SUSPENSION

If the other contractual parties agrees to the suspension then both parties within the notice period must agree to the  ff. terms & conditions of the suspension and record it in the minutes of the last contract meeting.

Failure to agree on the terms and conditions of the contract suspension will lead to contractual disputes.

Prior to the lifting of the suspension the contract suspender must issue sufficient written notice of work resumption as per the contractual provisions.

CASE- DISPUTE DUE TO WORK SUSPENSION

•Employer suspended a portion of work due to insufficient funds but the rest of the contract continued.

•Work progressed on the other portions for 3 years with numerous delays until the suspension was lifted by the employer.

•At what rates is the contractor to undertake this portion of the works?

No comments yet.
Back to all items

Sign up and obtain a good discount on our fess